A couple of weeks ago I did a poll on Twitter asking if you’d like to see a wedding series on my blog now that Sam and I are starting to plan our wedding (exciting stuff). Over 100 of you voted yes so thank you for that. And to the two people that voted no thank you, soz but it’s happening anyway. I forget that I started my blog to be like an ‘online diary’. I’ve become more interested, or worried, about writing about what I feel you want to read. I’m going to start writing a few more personal posts. Something for me to read back on over the years. I hope you enjoy reading them too. I thought I’d start my wedding series from the beginning. There would be no wedding without an engagement right? So here we are, here’s my engagement story. 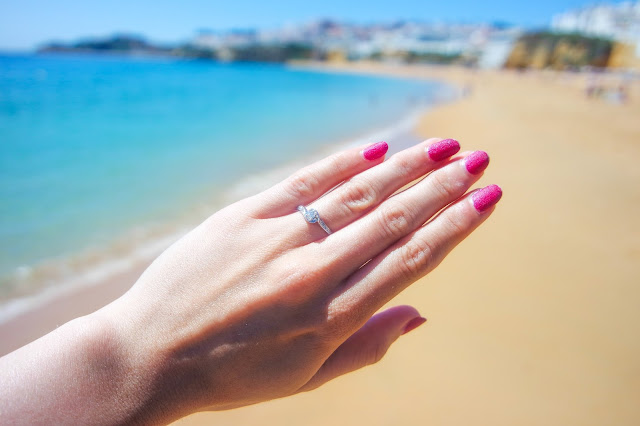 Sam and I always make a point of going away to celebrate our anniversary instead of buying presents or cards. It’s much nicer to take some time to ourselves to enjoy each others’ company. I’d choose that over presents any day. Last year was no different. We had some time off work and booked a very last minute holiday to Albuferia, Portugal for 4 nights. I’ve written a post on the holiday and what we got up to here but I just wanted to expand on our engagement story. Honestly, nearly a year later it still seems surreal. I can’t believe Sam and I are getting MARRIED.

We’d been in Portugal for two days already and our anniversary was just another day. We made our way down to the hotel restaurant to have some breakfast. There wasn’t any tables available so we shared a table with an older couple. We got chatting about our holiday and told them we were away for our 6th Anniversary. They we asking all the awkward relationship questions like ‘Are you planning on getting married?’. Completely laughed off by myself. Sam just sat there in silence which is completely normal for him.

We had a relativity ‘normal’ day, as normal as a day on the beach goes anyway. We went into town and had lunch, walked along the beach and did some shopping. After a few years the novelty of anniversarys wears off. I never want to do anything special or over the top. I just want to be with Sam and that’s all that matters to me.

Sam suffers really badly with toothache when he eats/drinks certain things (he really should get his teeth fixed) and was in absolute agony after having an ice cream. So we went off to find some strong painkillers. Sam was adamant we had to walk along the beach to the pharmacy but I was determined it was straight to the pharmacy, straight to the hotel and straight to bed. Little did I know that Sam was planning to propose.

We didn’t do much the next day, we sat by the pool for a little bit (it was May so it wasn’t quite sunbathing weather) then made our way into town for a bit of shopping and food. Although we were all inclusive, it’s always nice to eat out too. Sam had a burger and I had cheesy chips, home comforts right? We went back to the hotel for food then Sam suggested that we went for an evening stroll along the beach. We passed a supermarket and bought some beers and crisps to eat whilst we’re walking along the beach. I literally can’t do anything without food!

We walked along an old pier, Sam laid his jumper down and we sat on the end of the pier with our beers and munchies and took in the wonderful view. ‘Do you want your anniversary present?’ Sam asked, then opened up a box containing the most gorgeous ring and the words ‘Will You Marry Me?’ came out of his mouth. I honestly thought it would never happen. Sam isn’t romantic whatsoever so I wasn’t expecting it at all. Sam actually had to remind me five minutes later that I hadn’t answered his question. I was lost for words which never happens to me. I had to ask Sam whether he was joking.

After about an hour of trying to figure out whether what just happened had actually happened celebrations were in order. We found the nearest cocktail bar, I think it was called Dominoes, to have a few drinks at. I went for a Strawberry Daquari and Sam had a manly beer or two. They had a Irish singer performing which made the night perfect, we just chilled and listened to the music until the early hours of the morning.

The next morning at breakfast we met the old couple that we were talking to on our anniversary. I showed them my ring and told them I was engaged (whilst shaking uncontrollably). They were SO pleased for us.

It took so long for it to feel ‘real’. It still seems surreal nearly a year later! Telling people was the nicest bit, I told my best friend first by snapchatting her a photo of my ring (just before I got on the plane leaving her omg omg omgs to no reply, sneaky). My Mum and her partner picked us up from the airport and I couldn’t think of the right thing to say. It was over an hour drive and just before she dropped us home I got her to pull over and I showed her my ring. I then went to visit my Uncle and Grandma to let them know and I gave my New Zealand family an email to tell them the good news.

We told Sam’s parents the next morning. I walked into their living room with my cuff covering my hand, had a little chat about our holiday and then announced it. Sam’s Mum said she knew the second I walked in covering my hand and they were over the moon for us.

At this point, I still hadn’t cried. I am the most emotional person ever, I cry at absolutely anything so I knew that the news hadn’t sunk in for me yet. I had to wait two days for my Dad to get home from Ibiza before I could tell him the news, I literally waited outside his house for an hour for him to get home from the airport. The second he got home, I showed him my ring and I burst into tears. That was all I needed for it to feel real for me and just proves how much of a daddies girl I am.

Once we’d told our loved ones, I could then announce it to the world. I was overwhelmed with everyone’s lovely comments on Facebook and Twitter and always read them again if I’m having a down day. They put an immediate smile on my face.

OK so this story was much longer than I’d hoped and I’ve babbled quite a lot, oops. I’m going to have a read through now to see if there’s any bits I can cut out. But then again I want it in as much detail as possible as this is going to be so nice to look back on [update: read through and cut things out, still mega long].

I hope you’ve enjoyed reading our engagement story, the first post of my wedding series, and you’re looking forward to many many more.